PETALING JAYA: With automatic places in the prestigious Thomas Cup and Uber Cup Finals up for grabs, Malaysia have no intention of closing the door on independent shuttlers when they compete in the Asia Team Championships at the Setia City Convention Centre in Shah Alam from Feb 15-20.

Teams who qualify for the semi-finals of the qualifiers will automatically secure their spots for the Finals to be held in Bangkok, Thailand, in May.

That’s why the Badminton Association of Malaysia (BAM), according to secretary Datuk Kenny Goh, will bank on their best players to carry the nation’s challenge.

More interestingly, he said BAM would not deny the independent shuttlers a chance to join the national squad for the tournament, which is organised by the Selangor State Sports Council together with the state government, as hosts, besides getting the cooperation of Badminton Asia and BAM.

“We will take a look at the available players, including those from within and outside BAM... who is the best.

We will look at various factors, including in terms of player contribution and also from the tactical aspect because this is a team game,” said Kenny.

“I’m always in communication with both the coaching directors, so they tell me that our preparation is good and, although we only knew about the tournament recently, the players are ready and will give their best,” he said after a media conference yesterday.

The men’s squad emerged as the runners-up after losing to Indonesia in the final while the women’s team fell to Japan in the semi-finals.

However, their success in reaching the semi-finals was enough for both teams to earn automatic slots at the last Finals.

Kenny also said that the absence of powerhouse China would not make the meet any less competitive. — Bernama 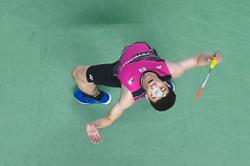