On Sunday, the world No. 65 Wei Chong-Kai Wun showed that they are set to be one of the country’s dependable pairs when they lifted the Syed Modi International title in Lucknow after defeating Krishna Prasad-Vishnuvardhan Goud of India 21-18, 21-15.

The tournament may not have featured the world’s best but Wei Chong-Kai Wun took their chances well to underline their consistency.

In the last one year, they have won three lower-tier titles out of the five finals they reached. They won the Polish Open, Spanish International and Irish Open, and came in runners-up at the Welsh Open and Czech Open.

But the title in India is their first in the fourth-tier level tournament.

The 22-year-old Wei Chong said the win was important to build their confidence as they look forward to making their presence felt even stronger.

“This is our first title in this level and we are happy with the experience we have gained in every match,” said Wei Chong.

“I’ve to admit that we were worried for our health as many players withdrew because of Covid-19 but we did our best to stay safe.

“We wore a few layers of masks and always sanitised.”

Wei Chong and Kai Wun were teamed up in 2020 but only got to play together last year. They are currently the fourth pair in the country behind Aaron Chia-Soh Wooi Yik (No. 7), Teo Ee Yi-Ong Yew Sin (11) and Goh Sze Fei-Nur Izzuddin Rumsani (17).

“Our goal is continue to show improvement in our game in the upcoming tournaments. We know there are many major tournaments ahead but we just want to focus on building our partnership first.

Wei Chong said the chemistry between him and Kai Wun is good.

“Kai Wun has lots of idea in the court and he is super focused in every single point, we hope to get better,” he added. 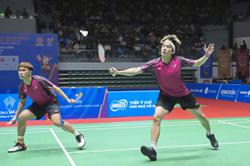