Letshanaa reacts during the National Junior Finals in Seremban.

The 18-year-old is in the race against time to be fit after recovering from a back injury sustained in October last year.

Letshanaa has not featured in any tournament since she reached the quarter-finals of the Czech Open.

The promising shuttler, who made her debut in the Uber Cup Finals in Aarhus, Denmark, was supposed to return for three back-to-back tournaments in Europe this month – last week’s Estonian International, this week’s Swedish Open (20-23) and Ukraine Open (27-30) but the Badminton Association of Malaysia had to pull her out as she was still not match fit.

“We would have sent her (Letshanaa) to play in these tournaments but unfortunately, she’s not fully ready yet,” said Choong Hann.

“There’s no point sending her knowing that she will not be able to play her best. We have learned from past experiences we had with (S.) Kisona.

“Letshanaa’s condition isn’t that serious, it’s just that she still needs to undergo rehabilitation. She’s already back in training but is not fit yet.

“Once she’s ready, there’s surely plenty of action awaiting her.

“Hopefully, we will have her back by next month for the team event.”

As for 17-year-old Siti Nurshuhaini Azman, whose name was also removed from the European trips, Choong Hann explained that she still needed to put in more hours at training.

“She was only promoted to the senior team not too long ago (in October), and she definitely needs to train for a longer period in order to be more competitive at the senior level,” said Choong Hann.

“In fact, most of her tournament planning was done way earlier by Datuk Misbun (Sidek, national junior coaching director). We have plans in store for her too.”

Besides Nurshuhaini, others promoted to beef up the depleted senior team were Joanne Ng, Tan Zhing Yi, Kho Jing Wen and Loh Zhi Wei. Prior to that, only Kisona, Eoon Qi Xuan, Letshanaa and Myisha Khairul were left in the team following the retirement of two-time world junior champion Goh Jin Wei.

The 19-year-old Myisha played in Estonia last week and made it to the main draw before losing 20-22, 14-21 in the opening round to top seed and eventual champion Kristin Kuuba of Estonia. 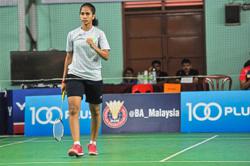