Shaq to attack from bottom to top – thanks to Tze Yong Making it count: Shaqeem Eiman Shahyar is hoping to take advantage of the tournaments lined up for him this year. — BAM

An inspired national singles shuttler Shaqeem Eiman Shahyar is determined to replicate teammate Tze Yong’s success in making it to the elite stage through a series of consistent results in the lower-tier circuit.

Last year, Tze Yong nailed three titles in four finals on his way to breaking into the world’s top 60, which paves way for him to secure more regular World Tour starts.

And the 20-year-old Shaqeem hopes to do the same, too, by taking advantage of the tournaments lined up for him this year.

Shaqeem will head straight into action this month as he has been entered for the Estonian International from Jan 13-16, Swedish Open (Jan 20-23) and Ukraine Open (Jan 27-30).

“Tze Yong has showed us the way on how he climbed his way up from the bottom, so the onus is on us (the other back-up shuttlers) to follow in his footsteps,” said Shaqeem, a 2019 World Junior Championships quarter-finalist.

“We should really cherish every single tournament opportunity we can get and make the best of it.

“I’m really happy to be getting three tournaments already in January and I want to start this year as strong as possible.

“Hopefully I’ll be able to make it to the semi-finals in all three meets.”

Shaqeem was only able to play in just three tournaments – all last year – despite being promoted to the senior team in 2020, no thanks to the Covid-19 pandemic.

He managed to reach the semi-finals of the Hellas International in Greece and was a quarter-finalist at the Latvian International.

“We waited long enough to finally get those few starts in September last year. I was able to identify my weaknesses, particularly my defence and rectified them,” said Shaqeem.

“I certainly feel like I’m a better player than I was last year and I would like to put my game to the test in Europe again.

“I look forward to translating these improvements gained from training into some solid results.”

Besides Shaqeem, the other four singles shuttlers hoping to impress are Lee Shun Yang, Jacky Kok and Ong Ken Yon.

All four of them have plenty of deficit to make up in the world rankings as they are currently ranked outside the top 400.

The Badminton Association of Malaysia are desperate to fast-track the progress of these youngsters in a bid to narrow the gap between them and national No. 1 Lee Zii Jia. 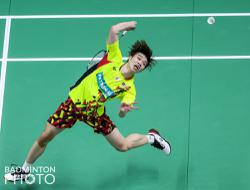