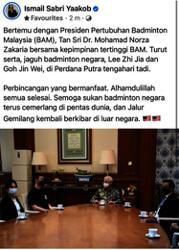 PETALING JAYA: National top shuttler Lee Zii Jia admitted that his performance was a letdown after squandering a good chance to reach his second major final since his All-England triumph in March.

The 23-year-old headed into yesterday’s semi-finals against Thailand’s Kunlavut Vitidsarn as an overwhelming favourite, but the world No. 23 upset the form book to clinch a convincing 21-18, 21-18 win.

The result was certainly disappointing for world No. 8 Zii Jia as he had just defeated the Thai opponent during the group stage.

Zii Jia was also unbeaten in all his three group matches and did not drop a single game en route to the last four.

Kunlavut, a three-time world junior champion, was clearly inspired after being named the BWF Most Promising Player of the Year Award on Friday.

Zii Jia said he wasn’t playing anywhere near his best while crediting Kunlavut as the better player of the day.

“Kunlavut was more patient than the other day. It seemed like he was more prepared this time and knew how to deal with my game. He was in control.

“I can’t be satisfied with my performance.”

Still, Zii Jia preferred to look on the bright side especially after improving on his debut outing earlier in January.

In the last Finals in Bangkok, he failed to register a single win.

“It’s still a good result compared to earlier this year in Bangkok, at least this time I’ve made it to the semi-finals,” he said.

“Now I just want to refresh myself and get ready for the World Championships (in Huelva, Spain, next week).”

Malaysian fans’ hopes of seeing the country being represented in the final today went up in smoke as Ong Yew Sin-Teo Ee Yi also crashed out in the men’s doubles competition.

Ee Yi was troubled by a back problem as the pair went down 18-21, 15-21 to Japan’s Takuro Hoki-Yugo Kobayashi.

Ee Yi was disappointed that their journey ended this way.

“It was a great experience overall, but I was very disappointed with myself for today’s match,” he said.

“I was having a back pain and needed my partner to cover for me. I would like to say sorry to him.”

By missing the final, Zii Jia and Yew Sin-Ee Yi had missed out on a chance to double their prize money.