Given the disruption caused to the circuit by virus over the last two years, the period of consideration for the award was extended from November 2019 until Oct 31, 2021.

Axelsen was rewarded for his fine run that started from winning the Spain Masters in Barcelona in February 2020.

The Dane made 10 finals in 11 individual tournaments, winning seven, including gold at the 2020 Tokyo Olympic Games.

“This means a lot to me,” said Axelsen.

“Thank you to my team, my coaches, my friends, my family, my competitors.

“This year has been really eventful. A few downs, but a lot of ups, with the Olympics being the biggest win, a dream that came true.

“This award gives me a lot of motivation to work harder,” added Axelsen after reaching the semi-finals of the ongoing World Tour Finals in Bali yesterday. 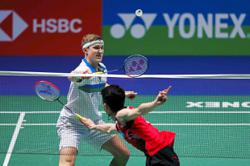