The 53-year-old Rexy wants to achieve what he failed to do during his first stint – produce world and Olympic Games champions.

“The entire nation want Malaysia to win at the Olympics and World Championships,” admitted Rexy, after reporting for duty at the Academy Badminton Malaysia (ABM) yesterday.

“I have failed to fulfil these goals when I was here as a coach for seven-and-a-half years. So now I’m back to settle the unfinished business.”

The Indonesian legend Rexy is aware of the high expectation set by the BAM top brass but believes he can deliver immediate results.

“I’m aware of the high expectations but I love big challenges, it will keep me motivated and bring the best in me,” he said.

“It’s only fair for all parties to have high expectations because Malaysia is a badminton nation with great history.

“Malaysia have won the Thomas Cup, Asian Games, Commonwealth Games and came close on few occasions for the Olympics and World Championships.

On assuming a deputy role for the first time after being the supremo of Indonesia and Thailand, Rexy is cool about the “demotion” of a sort.

“I have absolutely no problem with that.

“It’s just a position and I’m not bothered by it. After all, everyone needs to work as a team for one common goal,” he said.

“I would not have minded to even return as a mere coach as I’m more comfortable to be hands on and work on the field.”

Rexy chose to return to Malaysia although he could have opted for a less-stressful job by rejoining his former employers either England or the Philippines.

The fact that former head coach Rexy is willing to settle for a No. 2 role to Wong Choong Hann, speaks volumes on how much he wanted the job.

“I was approached by the Philippines and England first but I took the offer from BAM that came at the last-minute. I didn’t think twice,” added Rexy.

Rexy had a successful tenure with BAM from 2005 to 2012 where he was best known for guiding Koo Kien Keat-Tan Boon Heong to become the world No. 1 men’s doubles pair.

It was also under him that Kien Keat-Boon Heong won the 2006 Asian Games gold in Doha and 2007 All-England title. 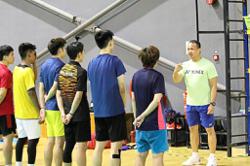