PETALING JAYA: National singles shuttler Ng Tze Yong found that winning a third career title is not that easy to come by.

In the decider, Tze Yong had the match under control with a commanding 10-5 lead, but the world No. 132 Louda, who clearly enjoyed a great support from the home fans, launched a spirited comeback to draw level at 12-12.

Although Tze Yong managed to halt Louda’s progress and pulled ahead at 18-15, he could not fend off his opponent’s second charge.

Louda overturned the deficit and was first to reach match point at 20-19.

Unfortunately, Tze Yong himself also failed to convert three of his opportunities at 22-21, 24-23 and 25-24 to surrender the title.

Tze Yong, fresh off a fine Thomas Cup debut where he earned praises for his valiant fight against world No. 7 Jonatan Christie last week, had been performing well on his way to the final as he did not drop a single game until yesterday.

With the defeat, Tze Yong could not add a third title to his victory at the South Australia International (2019) and Polish Open in March this year.

In the women’s singles, Siti Nurshuhaini Azman also failed in her bid to land her first senior title. The 17-year-old was beaten 16-21, 5-21 by Indonesia’s Putri Wardani, the Spain Masters champion in May. 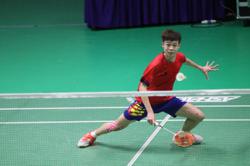