PETALING JAYA: Shuttlers Goh Sze Fei-Nur Izzuddin Rumsani are set to become the world’s top 20 men’s doubles pair for the first time, thanks to their semi-final outing at the just-concluded Denmark Open.

The two 23-year-olds are projected to climb seven rungs to No. 19 when the latest Badminton World Federation (BWF) world ranking list is released tomorrow.

It will be Sze Fei-Izzuddin’s long-awaited breakthrough as they have been hovering in the top 30 ranking for more than two years.

Their previous best position was No. 23 in November 2019.

Rio de Janeiro Olympics silver medallists V Shem-Wee Kiong will gradually slide down the standings as they are no longer playing together.

Sze Fei-Izzuddin will be determined to build on the ranking progress when they compete in the French Open, which begins in Paris tomorrow.

On paper, they are looking good to make the quarter-finals but they must first take down former national team seniors Yew Sin-Ee Yi in the opening hurdle.

If Sze Fei-Izzuddin advance, then they should face the other first-round winners between Holland’s Ruben Jille-Ties Van Der Lecq and England’s Callum-Hemming-Steven Stallwood.

Sze Fei-Izzuddin will most likely cross path with world No. 1 Marcus Fernaldi-Kevin Sanjaya in the last eight, but if the Indonesians’ recent form is of any indication, they are not unbeatable.

The unseeded duo stole the limelight at the Odense Sports Park by ousting world No. 10 Satwiksairaj Rankireddy-Chirag Shetty of India and world No. 7 Fajar Alfian-Muhammad Rian of Indonesia en route to the last four.

Their gallant run eventually came to an end at the hands of home favourites Kim Astrup-Anders Skaarup Rasmussen at 11-21, 21-19, 18-21.

It was a morale-lifting outing for Sze Fei-Izzuddin as they have not been able to live up to their potential after being paired up in 2016.

Their career-best result prior to last week was coming finishing runners-up in the 2017 Malaysian Masters. 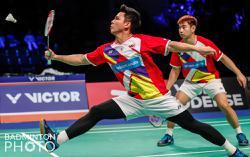