PETALING JAYA: Indonesian doubles legend Rexy Mainaky is set for a second coaching stint with Malaysia after being rehired by the Badminton Association of Malaysia (BAM) as its deputy coaching director.

Rexy, whose contract with the Badminton Association of Thailand (BAT) ended this month, will report for duty at the Academy Badminton Malaysia (ABM) in Bukit Kiara on Dec 1.

The 53-year-old's role will be to assist coaching director Wong Choong Hann but more crucially, his input will prove invaluable to the doubles department.

"We're delighted that Rexy will be joining the coaching team," said Norza in a statement Monday (Oct 25).

"This appointment is integral to reinforce the progress that BAM has made in the last few years in our unwavering pursuit for success.

"Rexy is a good and experienced coach with a stellar track record. He will be given specific key performance indicators to immediately revitalise and further motivate our young doubles," he said.

Rexy had previously served as the national doubles coach from 2005-2012.

He was best remembered for transforming men's doubles pair Koo Kien Keat-Tan Boon Heong into world No. 1, as well as winning 2006 Asian Games gold and the 2007 All-England title. 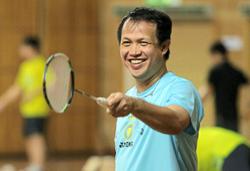