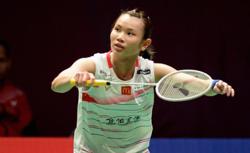 Riveting rivalry: Viktor Axelsen in action against Malaysia’s Lee Zii Jia in the All-England final in March which the Malaysian won. — AFP

PETALING JAYA: From disappointment in Denmark to making a comeback with a better frame of mind in France.

That will be Lee Zii Jia’s plan as he seeks a quick revenge over Viktor Axelsen of Denmark in the France Open starting on Tuesday in Paris.

On Friday, Zii Jia put up a good fight but it was not good enough to beat a fired-up Axelsen, who was backed by strong home support in Odense. The Malaysian went down 19-21, 19-21 in 39 minutes.

Just eight months ago, Zii Jia had beaten the world No. 2 in the final of the All-England.

“We’ve to admit that Zii Jia lost to Axelsen who was in a better form. There is a chance at the France Open and I’m sure Zii jia will be back to play his best again,” said Hendrawan.

“It’s a busy second part of the year. We have several more tournaments to go and I’m sure Zii Jia will strike it right with good results in some of them.”

In France, barring any upsets, Zii Jia may face Axelsen again in the quarter-finals but the Malaysian No. 1 must first clear Singapore’s Loh Kean Yew in the opening round.

Axelsen, however, has a tricky first-round match against South Korea’s Heo Kwang-hee, who had beaten Kento Momota of Japan twice in the last three months.

In the ongoing Denmark Open, Axelsen and Momota are likely to play against each other in the final.

Axelsen should beat his semi-final opponent Lee Cheuk Yiu of Hong Kong while Momota has a good chance to get the better of Indonesia’s Tommy Sugiarto.

In the men’s doubles, Malaysia’s challenge has been reduced to only one pair after the defeats of Ong Yew Sin-Teo Ee Yi.

The independent shuttlers went down fighting 18-21, 19-21 to Mark Lamsfuss-Marvin Seidel of Germany in the quarter-finals on Friday. The Germans had upset second seeds Mohd Ahsan-Hendra Setiawan in the opening round.

Lamsfuss-Seidel take on Japan’s Takuro Hoki-Yugo Kobayashi of Japan in the semi-finals while the other semi-final match-up will be between Malaysia’s Goh Sze Fei-Nur Izzuddin Rumsani and homesters Kim Astrup-Anders Skaarup Rasmussen.

Sze Fei-Izzuddin have defied the odds by beating two top 10 pairs to reach the last four. They knocked out India’s world No. 10 Satwiksairaj Rankireddy-Chirag Shetty in the second round and stunned world No. 7 Fajar Alfian-Rian Ardianto of Indonesia in the quarter-finals on Friday.