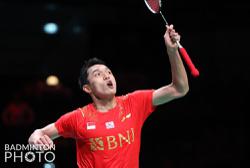 Will Shi Yuqi play in the final tie against Indonesia? He retired with an ankle injury on Saturday. - Badminton Photo

PETALING JAYA: China and Indonesia will face off in a battle for the coveted title in the Thomas Cup Finals in Aarhus, Denmark on Sunday (7pm).

China had to come from behind to win after Shi Yuqi gave up the first point to Kento Momota in an unfortunate way when he retired at 20-22, 5-20 after aggravating an ankle injury.

He had hurt his ankle at the start of the second game and soldiered on but the pain proved too much to bear as he finally threw in the towel at 5-20.

He Jiting-Zhou Haodong put China back in the race by downing Yuta Watanabe-Yugo Kobayashi 21-17, 7-21, 21-16 before youngster Li Shifeng continued to show that he's the real deal by outplaying Kanta Tsuneyama 21-17, 21-15.

Indonesia also won their semi-final tie a similar fashion when they came from one point down to beat 2016 winners Denmark 3-1.

As expected, Fajar Alfian-Muhammad Rian did not disappoint when they powered past Mathias Christiansen-Frederik Sogard 21-14, 21-14 to take Indonesia to their 20th final.

Indonesia have not won their Cup since their last success in Guangzhou in 2002.

It will be the sixth final between Indonesia and China in the Thomas Cup, with China winning it three times, which includes their last victory at the 2010 Kuala Lumpur edition.

Indonesia and China, who boast 13 and 10 titles respectively, are the most successful nations in the tournament history.