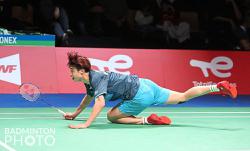 PETALING JAYA: Japan survived a scare to reach the semi-finals of the Thomas Cup Finals.

It all pointed to an early knockout after the shocking defeats of their trumpcards – Kento Momota and Takuro Hoki-Yugo Kobayashi but the other players in the team rose to the occasion as Japan went on to beat South Korea 3-2 in the quarter-finals at Ceres Arena in Aarhus yesterday.

The hope was on the world No. 1 Momota to draw first blood but he collapsed once again at the hands of world No. 33 Heo Kwang-hee (pic), who is turning out to be his nemesis.

The Korean had made heads turn in August when he crushed Momota’s Olympics dream at home after beating the two-time world champion in the group stage in Tokyo.

The script was similar in Aarhus as the 26-year-old Kwang-hee took charge from the start to serve another blow to Momota.

Japan had hoped to level the score through their in-form Takuro Hoki-Yugo Kobayashi but the duo went down in a whimper with a 18-21, 13-21 defeat to world No. 9 Choi Solgyu-Seo Seung-jae.

Then, the fightback started for Japan when the world No, 13 Kanta Tsuneyama restored some order by outclassing Jeon Hyeok-jin 21-10, 21-18 in their first meeting on the international stage.

In the decider, Kenta Nishimoto lived up to his billing to blow away newcomer Cho Geong-yeop 21-15, 21-10 to seal the deal for Japan.

Japan takes on China in the semi-finals today and the tie could go either way.

Momota will have a chance to make a quick redemption when he takes on Shi Yuqi to give his team a good start. He knows that the first point will be crucial as they aim to upset the defending champions.

Japan lost 1-3 to China at the last edition in Bangkok, Thailand, in 2018 and the solitary point was won by Momota, who defeated Chen Long in straight games.