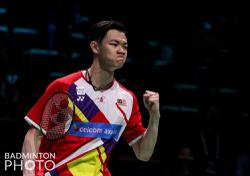 Brian: ‘If I can get it (offensive ability) to a similar level as Zii Jia, then I think I can become really good.’

PETALING JAYA: Canada’s rising star Brian Yang was so in awe of Lee Zii Jia’s attacking prowess that he now aims to model his game after the All-England champion.

The 19-year-old is convinced that he can be a “really good” player once he takes his offensive skills up a notch and be as smashing as Zii Jia on the court.

The reigning Pan American champion stated that he needs to improve on his attack if he wants to compete with the world’s best.

“If I can get it (offensive ability) to a similar level as Lee, then I think I can become really good,” said Brian after going down 18-21, 13-21 to Zii Jia in Canada’s 5-0 whitewash by Malaysia in their Group D tie of the Thomas Cup on Tuesday.

“It was pretty hard for me because his attack is really good.

“It was also hard for me to defend and I was also scared to play it high during those long rallies because I didn’t want to defend too much.

“His defence was just really solid as well and I couldn’t really break him.”

The defeat handed the world No. 39 a reality check following a series of fine performances that saw him pull off stunning wins over Indonesia’s world No. 7 Jonatan Christie and No. 13 Kanta Tsuneyama of Japan.

Brian looked as if he was about to do the same against Zii Jia when he steered clear 13-11 in the opening game.

But Zii Jia, powered by his trademark attacking play, proved to be the better player of the day.

It was Brian’s second defeat to Zii Jia having also lost in the first round of the All-England in March.

“I was really nervous going into the match. I kind of wanted to win real bad especially since I lost to him earlier this year. I wanted that revenge,” said Brian.

“I also think part of it was because I wanted a point for the team as well. Seeing our girls yesterday beat Malaysia (4-1 in the Uber Cup) made me think that we could also beat them, so I guess that kind of put extra pressure on me.”