The 17-year-old Siti endured a rough Uber Cup Finals debut on Sunday as she slumped to an 8-21, 3-21 defeat to world No. 9 He Bingjiao in the second singles in just 23 minutes at the Ceres Arena in Aarhus.

The heavy defeat has left many to ponder whether it could cause a negative impact on the youngster’s morale and confidence.

But Choong Hann is of the opinion that Siti can only grow and mature from such an experience.

“I think it’s such a great opportunity for Siti to play not only in a tournament of the highest level, but also have the chance to face a top-ranked opponent such as Bingjiao, who’s a Tokyo Olympics semi-finalist,” said Choong Hann.

“I can see that she’s quite calm and tried to overcome the challenges coming from Bingjiao. But there’s an obvious gap in terms of ability between her and the opponent, so Siti found it hard to match her opponent in speed, movement and strength, and eventually felt lost in the game and could not win points.

“This experience will surely stand Siti in good stead for the future. It’s going to spur her on to train even harder.

“From the coaches’ perspective, we made this bold decision to expose our young players so that they can learn fast from these invaluable lessons.”

None of the Malaysian shuttlers were able to take the game to their mighty Chinese opponents as all of them fell in straight games.

“Letshanaa has put up a solid style of play.

“She was able to showcase her intelligence on the court as well as her steady skill set,” said Choong Hann.

“It was not a bad performance, considering this is her first time playing a top rival. She showed her bravery and was quick to adapt. At some point in the game, she managed to put the pressure on her opponent too.” 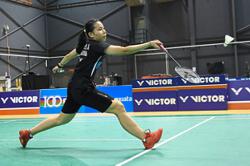 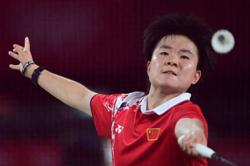