The side comprising mostly first-timers battled for more than five hours before staging a superb 3-2 win against Indonesia in a thrilling quarter-final tie at the Energia Areena in Vantaa, Finland on Friday.

Aaron-Wooi Yik set the tempo of the day when they took only 33 minutes to blow away world No. 1 Marcus Fernaldi-Kevin Sanjaya 21-12, 21-15 in one of their easiest victories against the formidable pair.

They had beaten Marcus-Kevin for the first time at the Tokyo Olympics en route to their podium finish last month.

Skipper Lee Zee Jia put Malaysia back in the driving seat when he defeated Anthony Ginting 21-11, 21-16.

No one gave a ghost of a chance when Pearly Tan-M. Thinaah faced reigning Olympics champions Greysia Polii-Apriyani Rahayu in the women's doubles but the youngsters almost tore the formbook apart.

The Swiss Open champions showed plenty of fire in their bellies as they fought magnificently to hold Greysia-Apriyani by the jugular before going down 20-22, 21-17, 18-21.

It was then up to the world No. 27 Hoo Pang Ron-Cheah Yee See to deliver the winning point and the duo did not disappoint.

Pang Ron-Yee See rose to the occasion by pulling off a sensational 21-19, 9-21, 21-16 win against the world No. 4 Praveen Jordan-Melati Daeva to take Malaysia into the semi-finals of the world mixed team event after a lapse of 12 years.

The last time Malaysia were in the semi-finals, they lost 3-0 to China at the 2009 edition in Guangzhou.

Malaysia face Japan again in the semi-finals on Saturday at 9pm (Mas time). Malaysia lost 1-4 to Japan in the final Group D tie on Thursday.

The other semi-final match-up will be between China and South Korea at 3pm Saturday (Mas time). 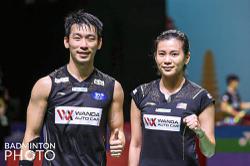