Taiwan pair are the ones to beat now, says Aaron

PETALING JAYA: Shuttler Aaron Chia has an immediate goal – to go after the scalps of Taiwan’s Lee Yang-Wang Chi-lin. Buoyed by his recent Olympics bronze-medal feat with partner Soh Wooi Yik, the 24-year-old Aaron says he is relishing opportunities to face off against the reigning Olympics champion when they resume their campaign on the international stage.

The world No. 3 Lee Yang-Chi-lin have now enjoyed their best career season. Before their Olympics breakthrough, they had won three back-to-back titles – two Thailand Opens and the World Tour Finals in Bangkok in January.

Aaron said they had lost three times to the Taiwanese with their last defeat at the final of the Thailand Open II in Bangkok.

“They showed their class when they won three titles in Bangkok, but I think, after winning this Olympics gold, they will be even more confident,” said Aaron.

En route to the Olympics glory, they defeated Hiroyuki Endo-Yuta Watanabe of Japan, Indonesia’s Mohammad Ahsan-Hendra Setiawan and China’s Li Junhui-Liu Yuchen – all in convincing straight games from the quarter-finals.

Aaron believes Lee Yang-Chi-lin will be even harder to beat after their Olympics success.

“We have found them hard to play, but I guess it’s going to be even tougher and trickier after this. They are established in their game now,” he said.

“Besides the Indonesians, Japanese and Chinese rivals, we also have to be wary of Lee Yang-Chi-lin.”

But Aaron is also feeling confident with Wooi Yik after their bronze medal feat in Tokyo.

“Beating Kevin-Marcus (in their eight meetings) and Ahsan-Hendra for the second time (in nine meetings) have done our confidence a world of good,” said Aaron.

“The victories at the biggest sporting stage has given us the belief that we can beat anyone.

“We can’t be satisfied with just one or two upsets. Besides Lee Yang-Chi-lin, we have also not beaten Japan’s top pairs (Watanabe-Endo and Takeshi Kamura-Keigo Sonoda) and Junhui-Yuchen, whom we lost to in the semi-finals.” 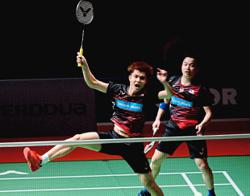 Zii Jia excited to face off with Japanese ace in Europe
Yap, Meng Yean feels she can succeed with new partner
Razif’s son Fazriq gets new partner to pursue doubles glory
It’s double the workload for Meng Yean
Momota can’t afford below-par display in Sudirman Cup
Mee Fen hopes Jin Wei will rethink about her decision to quit
Time is ripe for Nurshuhaini to be made a senior
Seu Bock: Jin Wei still achieved great feats despite ailment
Plus factor for Pearly-Thinaah ahead of major tournaments
In-form Liek Hou’s bid to reclaim world title on hold