PETALING JAYA: There’s a first time for everything.

So, can the Olympic Games be the perfect stage for Aaron Chia-Soh Wooi Yik to serve a knockout blow to Indonesia’s world No. 1 pair Kevin Sanjaya-Marcus Fernaldi and end their losing streak?

It will be answered today when Aaron-Wooi Yok clash against the top seeds for the eighth time in the men’s doubles quarter-finals at the Musashino Forest Sports Plaza today.

With four of the last seven defeats recorded in the first three months of 2020, it certainly doesn’t look too promising for Aaron-Wooi – at least on paper.

But former international Rosman Razak believes the long interval as a result of the Covid-19 pandemic may help the world No. 9 Malaysians turn the tables on Kevin-Marcus, nicknamed the Minions.

“I believe Aaron-Wooi Yik have come to the Olympics better prepared than the Indonesians,” said Rosman, who is one of the Astro Arena badminton pundits for the Tokyo Olympics.

“This has to be the best chance to break the duck and they must seize this golden opportunity.

“The Malaysians have played several tournaments this year, unlike the Minions.

The duo played one match at the All-England before the whole Indonesian team were controversially forced to withdraw after a passenger travelling on the same flight was tested positive.

“Kevin was also down with the virus in January, and that forced them to skip the tournaments in Thailand in January,” he said.

“I saw them play in the group stage, their game wasn’t particularly extraordinary or as dominant as before. Their movement on court looked tense.

“Their defeat to the Taiwanese pair (Lee Yang-Wang Chi-lin) has proven that they are beatable.”

Kevin-Marcus were dominant in 2019 when they won nine titles but their poor record in the World Championships shows that they can’t handle the weight of expectations on them.

They lost in the second round in Basel world meet (2019), and reached the quarter-finals in the 2017 and 2018 editions despite being one of the top three seeded pairs.

“Anything is possible in a major event like the Olympics. The Indonesians are under immense pressure,” said Rosman.

“One of Aaron-Wooi Yik’s problems is that they are slow in changing tactics. They need variety in their game.”

“The Indonesians are beatable, all you need to do is to apply the right tactic against them,” said Kien Keat.

“They are good in interception and front court coverage, so it’s imperative for Aaron-Wooi Yik to drag them into longer rallies but they must be resilient in their defence too.

“It all boils down to the mental game. Confidence is the key and don’t give them too much respect just because they are the world No. 1.”

“It’s stressful when you keep losing to the same pair.

“I remember back then we had hard time beating Kim Gi-jung-Kim Sa-rang (South Korea).

“We defeated them in the fifth attempt.

“The jinx can be broken.” 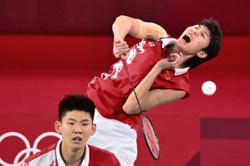