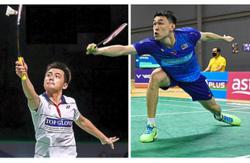 And that’s why Malaysia’s Lee Meng Yean-Chow Mei Kuan found it difficult to break the resolve of Indonesia’s Greysia Polii-Apriyani Rahayu in the opening women’s doubles Group A match at the Musashino Forest Sports Plaza yesterday.

The Indonesians came with a determination to beat Meng Yean after their shock defeat to the Malaysians in the group stage of the World Tour Finals in January this year.

World No. 6 Greysia-Apriyani were also extra motivated to make a point in the Olympics after they were barred from competing in the All-England in March this year.

They had arrived in Birmingham but were told by the Badminton World Federation (BWF) that they could not compete because one of the passengers in the same flight had been tested positive for Covid-19.

In fact, all the Indonesian players were prevented from playing in the tournament. Instead of competing, they were quarantined.

“The Indonesian pair were good but we also made it easy for them. We were unable to settle down in the opening match and were nervous,” said Meng Yean.

“We put undue pressure on ourselves. We knew that we could not afford to lose the match because it will affect our chance to the quarter-finals... we were thinking about that rather than playing our best.

With the opening game setback, the world No. 11 Meng Yean-Mei Kuan have a tougher path to the knockout stage. They face world No. 1 Yuki Fukushima-Sayaka Hirota tomorrow and must beat the Japanese to keep their hopes alive.

Only the top two pairs advance to the top eight battle.

“Right now all we want to do is to perform against the Japanese pair. We don’t want to be worried whether we have to win or we may lose easily. We do not need those kind of pressure,” said Meng Yean.