PETALING JAYA: Japan’s Kento Momota is fired up to win a gold at home but there are a host of title contenders as determined as him, including Malaysia’s Lee Zii Jia.

Without a doubt, the two-time world champion is the home favourite but he had gone through challenges over the last five years. He was banned for gambling that saw him miss the 2016 Rio Games and a car crash in Kuala Lumpur last year, after winning the Malaysian Masters, almost crippled his flourishing career. At that point, he was the most successful player having won 340 wins.

But now, the 26-year-old Momota is ready to unleash his pent-up desire to nail the big one although he admitted that the pressure to win was “huge”.

“I’d like to turn that into a positive, and go into the Olympics with a productive degree of pressure and tension,” he told Laureus in an interview.

“If I’m competing in it, I might as well go for gold.

“How confident am I? Well, someone who holds back would not win, so I say 100%. I can win gold, 100%,” added Momota, who will take on Timothy Lam of the United States today in Group A.

Momota also thanked the people of Fukushima, the region where he grew up that is still recovering from the 2011 earthquake, tsunami and nuclear catastrophe.

“I couldn’t get (to) this point without all my supporters including my family and friends. I also have much appreciation for the people in Fukushima who give me a place to play badminton while they have been coping with the disaster,” he tweeted.

National coaching director Wong Choong Hann says no one should be ruled out in the chase for glory.

“Zii Jia stands a fair chance to challenge the best in the tournament and it’s anybody’s game under the circumstances.

“It depends on the day,” said Choong Hann.

“Having said that, Momota, Victor, Tien-chen, Ginting and Anders still have a slight upper hand based on their past records and overall experience too.

“We just have to keep fighting,” he said.

World No. 8 Zii Jia, who is in Group M with Brice Leverdez of France and Ukraine’s Artem Pochtarov, will open his campaign against Pochtarov today.

All the group winners will advance to the knockout stage. If Zii Jia gets through, he will face Group N winner, who is likely to be defending champion Chen Long. 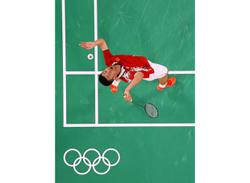