Tough luck: Lee Zii Jia could do nothing to improve his Race to Tokyo position, no thanks to the continuous disruption as a result of the Covid-19 pandemic. — AFP

PETALING JAYA: All-England champion Lee Zii Jia may be ranked No. 8 in the world, but he’s set to head to the Tokyo Olympics next month only as the ninth seed.

The seeding list will be published next Wednesday, but it’s already a known fact that the final Race to Tokyo standings on May 18 will be used as seedings for the Olympics instead of being based on the latest world rankings list.

And this leaves the 23-year-old Zii Jia with the prospect of landing a tricky knockout round draw.

Home favourite Kento Momota and Taiwan’s Chou Tien-chen, the first and second seeds, will receive a bye into the quarter-finals barring any hiccup in their preliminary group campaigns.

With a total of 44 players having qualified for the men’s singles competition, the field is expected to be split into 14 groups, according to the Badminton World Federation’s Tokyo 2020 regulations.

Only the group winners will advance to the knockout round.

The good news for Zii Jia is that he can expect to clear his group stage with ease given that he will not have any top-20 rivals for company.

Zii Jia could do nothing to improve his Race to Tokyo position, no thanks to the continuous disruption as a result of the Covid-19 pandemic.

Except for the Swiss Open, the other five remaining Olympics qualifiers lined up in between March and June failed to take place, namely the German Open (March 9-14), Asian Badminton Championships (April 27-May 2), Indian Open (May 11-16), Malaysian Open (May 25-30) and Singapore Open (June 1-6).

Although being his debut, hopes are high on Zii Jia to finish on the podium, continuing the medal-winning run started by his predecessor Lee Chong Wei who clinched three successive silvers in the last three Games since Beijing 2008.

Projected seeding list for men’s singles (based on final Race to Tokyo standings): 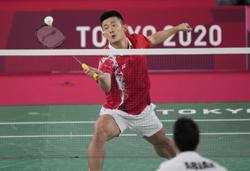