The 33-year-old celebrated his sixth victory on the trot by winning the Spanish Para-Badminton International in Cartagena yesterday.

World No. 2 Liek Hou was simply in a class of his own as he powered past Taiyo Imai of Japan 21-13,21-11 in a lopsided, 34-minute SU5 men’s singles final (impairment in upper body) to retain his 100% record against the world No. 5 after five meetings.

Although this title was won in the absence of his two Indonesian arch-rivals, world No. 1 Dheva Anrimusthi and No. 3 Suryo Nugroho, Liek Hou stressed the importance of keeping the strong momentum going with the Paralympic Games looming in three months time.

As there will be no more tournament coming up, Liek Hou will now head to postponed-Tokyo 2020 with a remarkable 31-match unbeaten run dating back to October 2019.

His other five titles prior to yesterday’s victory were secured in Denmark, Japan, Brazil, Peru and most recently in the United Arab Emirates (UAE) last month.

He defeated Dheva, his biggest Paralympics rival and gold medal contender, in the finals of Brazil and the UAE.

“Without Dheva and Suryo, I lived up to my favourite tag to win this week. I’m glad, ” said Liek Hou.

“I played well, enjoyed all the matches and there’s no pressure at all. That’s because I’m the world No. 2 now, which means, I’ll be seeded second in the Paralympics.

“It would have been ideal if I had met the Indonesians players once before Tokyo but then, playing them multiple times may not be necessarily a good thing.

“I wouldn’t want my opponents to analyse my game too much as Tokyo Games approaches.”

Meanwhile, Ikhwan Ramli could not make it a double joy after losing 13-21,16-21 to South Korea’s Lee Dong-seop in the men’s singles WH1 category (wheelchair) final.

Still, world No.12 Ikhwan has every reason to be proud of his achievement as he had boosted his chance to qualify for the Paralympics.

It was his second final after clinching a breakthrough victory at the Dubai Para-Badminton International last month.

He had upset world No. 3 Lee Sam-seop of South Korea and No. 6 David Toupe of France in the semi-finals and quarter-finals respectively.

He is in the 13th spot in the Race to Tokyo (Paralympics) and stands a good chance if he breaks into the top 10. 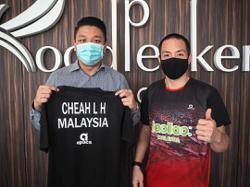