PETALING JAYA: In order to be the best, one must learn from the best.

And that’s exactly what Lee Zii Jia did as the world No. 8 revealed how he has modelled his game after Denmark’s Viktor Axelsen, and ended up beating his idol to the All-England crown last month.

Zii Jia said the reason why he looked up to Axelsen was because they shared a similar physical attribute, which is their height, and learned a thing or two from the 2017 world champion on how to maximise it to his advantage.

Standing at 1.86m, Zii Jia is among one of the three tallest top 10 men’s singles shuttlers alongside Axelsen (1.94m) and reigning Olympic Games gold medallist Chen Long of China (1.87m).

Zii Jia also acknowledged that Axelsen boasts more than just powerful attacking game as he is agile and fast as well for a tall player.

“My idol is Viktor. I have watched his gameplay many times and I love the way he plays, ” Zii Jia told the Olympic Channel.

“He’s a very tough opponent, of course, and he’s also a friend to me.

“I think when tall people play badminton, it’s very, very hard because we are tall.

“Every move is a struggle and we have to work on many core muscles and also our lower body, we have to make it strong, so that we can move very fast on court.

“This is one of the reasons why I like Viktor because he’s very active on court, even though he’s taller than me.

Like Axelsen, Zii Jia is now making his mark for his ability to terrorise his opponents with powerful smashes.

“I’m an attacking player. People were talking about my smash. Because I’m tall, attacking is the best weapon that I can have, ” said Zii Jia.

Nakanishi in a recent interview with Japanese media said: “Of all the players on the World Tour, his (Zii Jia) smash is probably the most powerful and that’s a cause for concern (for Momota).”

If all goes well, Zii Jia and Axelsen could face off again in next tournament, the Indian Open from May 11-16.

The duo will be joined by Momota, world No. 3 Anders Antonsen and China’s Shi Yuqi who is making a comeback after his last stint at the All-England in March last year. 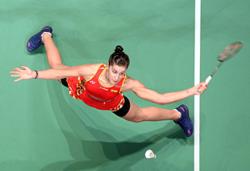