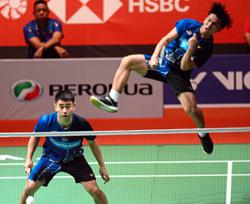 Confident: Goh Sze Fei (front) and Nur Izzuddin Rumsani are ready to face Denmark’s Kim Astrup-Anders Skaarup Rasmussen in the opening round of the Swiss Open.

PETALING JAYA: Men’s doubles pair Goh Sze Fei-Nur Izzuddin Rumsani will be hoping that third time’s the charm when they take on Denmark’s world No. 15 Kim Astrup-Anders Skaarup Rasmussen in the opening round of the Swiss Open today.

The world No. 27 pair are out to upstage the former European champions for the first time after being outclassed in two previous meetings, the latest was in the last 16 of the Indian Open in 2019.

Izzuddin believes they are ready to turn the tables on the Danes.

“We have improved a lot since our last meeting two years ago, ” said Izzuddin.

“We can take them down this time. For that to happen, we must play solid and consistent. We also need to mix our game to make it unpredictable because seasoned campaigners like them hardly make mistakes and are good at reading the game.”

And the Malaysians can’t pick a better time to end their drought as Astrup-Rasmussen have suffered a dip in form lately.

Since winning the Spain Masters last year, they have failed to make it past the second round in their last four tournaments.

They were booted out in the first round of the back-to-back Thailand Opens in Bangkok last month. Sze Fei-Izzudin, on the other hand, have enjoyed better fortunes.

En route to the quarter-finals of the Thailand Open I, they dumped former world champions Ko Sung-hyun-Shin Baek-cheol of South Korea in their opening match.

If they get past the Danes, their path to the last eight looks clear as they should face little trouble beating potential opponents in Austria’s Philip Birker-Dominik Stipsits or France’s Christo Popov-Toma Junior Popov.

In men’s singles, second seed Lee Zii Jia can breathe easy as he faces unheralded Sergey Sirant of Russia instead of Heo Kwang-hee of South Korea, who withdrew with former world No. 1 Son Wan-ho. Soong Joo Ven has taken up Wan-ho’s slot. However, the world No. 71 faces a daunting task against Indonesia’s world No. 19 Shesar Rhustavito.

World No. 33 Liew Daren also has a tricky first hurdle against Thailand’s No. 18 Kantaphon Wangcharoen.