PETALING JAYA: Independent shuttler Soong Joo Ven is keeping his fingers crossed that he can feature in the Swiss Open starting on Tuesday in Basel.

The 25-year-old is placed second on the waiting list but he has not given up hope just yet.

In fact, the world No. 71 has everything – luggage, documents and equipment – ready to jet off to Basel, and all he hopes to hear is the good news from the organisers.

Joo Ven has until tomorrow to know his fate as all participants are required to arrive latest by Monday due to Covid-19 testing.

“I’ve now moved up from fourth to second on the reserve list.

“I will get to compete if there are further withdrawals, ” said a hopeful Joo Ven.

“I’ve gone for my pre-arrival Covid-19 test which is a requirement by the tournament organisers.”

If Joo Ven gets into the main draw, Malaysia will be represented by three players in the men’s singles competition. The other two are world No. 11 Lee Zii Jia and No. 33 Liew Daren.

For Joo Ven, getting to play in the Swiss Open will be a bonus as he has been slated to compete in the Orleans Masters in France from March 23-28.

“It’s been a year since I last competed on the World Tour and I welcome every single playing opportunity that I get, ” he said.

“It’s a no-brainer to play in the Swiss Open if I get in because I will travel to Europe for the Orleans Masters after all. Who knows, I might get lucky for the All-England too. I’m now seventh on the waiting list.

“It’s not just about getting on the international stage again. I aim to come back with some commendable results too.”

Joo Ven has yet to make his first international start as an independent shuttler. He was dropped from the national team after playing in the Thailand Masters in January last year. 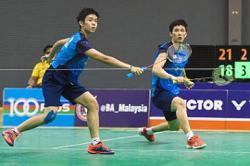