PETALING JAYA: Mixed doubles pair Goh Soon Huat-Shevon Lai Jemie will head to Europe next month with renewed optimism as they seek to get their independent career off to a flying start.

The world No. 10 were among several senior shuttlers shockingly dropped from the national team but that won’t stop them from aiming big in their next three outings – the Swiss Open (March 2-7), All-England (March 17-21) and Orleans Masters in France (March 23-28) – on their own.

Peng Soon-Liu Ying and V Shem-Wee Kiong marked their first outings as professionals by capturing the Thailand Masters in January 2019, while Yew Sin-Ee Yi accomplished the feat in the same tournament last year after just their third start since being axed from the national team.

“Hopefully, we’ll strike it lucky just like the rest too when we’re in Europe, ” said Shevon, who’s currently ranked 11th with Soon Huat in the Race to Tokyo rankings.

“Beginner’s luck or first-time lucky, whatever you call it. We’re eager to do well in all these tournaments, especially the Swiss Open and Orleans Masters, which we hope to gain some invaluable points for the Olympics rankings.”

Shevon admitted that she felt a great pressure had been lifted off her shoulders now that they no longer come under the national team’s scrutiny.

“I’ve been feeling a lot different in training lately, I find myself enjoying it more. I certainly hope this would help me and Soon Huat bring out our A-game again, ” said Shevon.

“In the earlier qualifiers, we didn’t do well because we struggled to deal wih the weight of expectation and we now find ourselves having to play catch-up in the final stretch.

“However, it also doesn’t mean that we can now play with a carefree mindset either. We’re still answerable to ourselves, sponsors and most of all, the fans because at the end of the day, we’re still playing for the nation.”

In fact, Shevon said she is even more determined to justify the trip to Europe after going through the ordeal of having to make their own travel arrangements and search for sponsors.

“I haven’t been sleeping much. There’s really a lot more to be done, ” said Shevon.

“Travelling during the pandemic is difficult, the process is extra tedious. Paperworks, booking... we have to coordinate a lot of stuff.

“And if that’s not bad enough, we also haven’t secured any sponsorship yet. We have dealt with a few and it’s all pending. Hopefully, we’re able to get some companies to come on board as we’re trying all we can to qualify for the Tokyo Games.

“We have even signed up for the (lower-tier) Orleans Masters, which could make the difference in our quest.

“But staying a month long in Europe will incur high expenses. We need to get all the financial assistance we can get.” 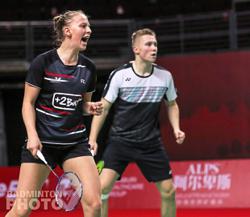 Get in sync or you’ll sink
100Plus share joy with All-England champ
Vivian and new partner will debut at Malaysian Open
No passage to India? It’s wait and see for Aaron and Co
Uneasy over Zii Jia
Choong Hann: Worry about Tokyo, not the new scoring system
Change of plan for champion
Liek Hou plays down favourite tag for Paralympics gold
Fans may get to watch Malaysian Open from stands
Zii Jia all for proposed shorter but intense scoring format