PETALING JAYA: Taiwan’s Lee Yang-Wang Chi-lin will not make the trip to Birmingham for the All-England after all.

Fans had hoped to see the Taiwanese continue their dominant form in Europe after their sensational three-peat performance in Bangkok last month.

The duo were unstoppable as they went on to win two back-to-back Thailand Opens and added their third by emerging as the champions of the World Tour Finals at the same venue.

Lee Yang on his Facebook posting said they had to make the courageous decision although All-England was special to them.

“We had a dream run in Thailand but it has been a rollercoaster of emotion from us since we returned home for another round of quarantine, ” said Lee Yang.

“It has been a challenge both physically and psychologically as we had experienced highs and lows. We have tasted complex emotions during our Thailand Tour from being worried, tensed, and then the excitement, exhaustion and anticipation.

“After careful evaluation, we’ve decided to withdraw from the Europe trip, ” he added. 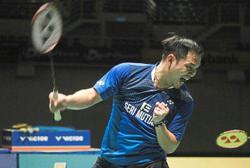