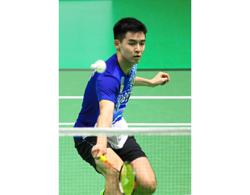 PETALING JAYA: Orleans Masters is only a lower-ranked tournament but shuttler Cheam June Wei (pic) is highly motivated to make a mark.

June Wei’s excitement is understandable as the Orleans Masters from March 23-28 in France is his first tournament in a year since the Thomas Cup qualifier in Manila, the Philippines, last February.

“I’m just thankful to get an opportunity to play, ” said the 24-year-old June Wei.

“Being the oldest in the men’s singles department, there is an expectation on me to do well. I will go for the title.

“There is pressure to win but that’s good. It will push myself to do well.”

June Wei is currently ranked 78th in the world and he has to move into the top 32 standings if her harbours hope to play in top-level World Tour badminton events.

“I did well at the Thomas Cup qualifiers and was all excited to keep the momentum going before Covid-19 put an end to all the tournaments, ” said June Wei.

At the qualifiers, he had upstaged Indonesia’s Jonatan Christie, South Korea’s Son Wan-ho and Japan’s Kenta Nishimoto in the second singles to help Malaysia finish runners-up in Manila.

“I’ve not competed in any tournaments after that and affected my ranking and morale. It has made it tough for lower ranked players like me, ” he said.

“I was hoping to break into top 25 but instead, I dropped further down last year.

“This year, my goal is still the same – to improve my ranking in the world and get more opportunity to play, ” he added.