Painful encounter: Kento Momota won the Malaysian Masters and then met with an accident.

PETALING JAYA: Malaysian shuttlers can expect a stiffer competition at the forthcoming German Open next month.

The second World Tour event of the season in Mulheim from March 9-14 will see the return of world No. 1 Kento Momota and the star-studded Japanese team.

Japan withdrew the entire team from the Asian leg of the World Tour in Bangkok last month after Momota tested positive for Covid-19.

They also did not enter players for the season-opening Swiss Open from March 2-7.

However, fans will have to wait longer to see the likes of reigning Olympics champion Chen Long and Shi Yuqi back in action as China did not submit any names for the second tournament in a row having given the Swiss Open a miss.

Their continuous absence leaves a big question mark as to whether they would skip altogether the All-England from March 16-21, which will be the culmination of the three back-to-back World Tour legs in Europe.

The Chinese stars were unable to participate in Bangkok because of their government’s travel ban.

It is not immediately known if their absence this time is due to the same reason as some of the Chinese women tennis stars had no problem travelling for tournaments.

Players like Wang Qiang and Zhang Shuai are in Melbourne this week for the Australian Open.

But the Japanese top shuttlers’ presence is good enough to light up the German Open as they boast no less than three world top-15 representatives in all the events, except the mixed doubles.

All eyes will surely be on two-time world champion Momota who, barring any unforeseen circumstances this time, is set to feature in his first international tournament after 14 months.

Fans are all eager to see if Momota is still the same player he was when he powered past Denmark’s Viktor Axelsen in the final to clinch the Malaysian Masters in January last year.

It was after that victory that he was involved in a car crash while on the way to the airport. He has made a full recovery.

In Momota’s absence, Axelsen and compatriot Anders Antonsen had both sparkled, winning two titles each.

Axelsen won the Thailand Open I and II while Antonsen added the World Tour Finals crown to his Denmark Open triumph in October last year.

Also making an eagerly-anticipated comeback after a one-year hiatus is the world No. 1 men’s doubles pair Kevin Sanjaya-Marcus Fernaldi.

The dominant Indonesian aces had to forgo their trip to Bangkok last month after Kevin contracted Covid-19.

The men’s doubles competition is certainly the one to watch in Germany as it features the strongest field since last year’s All-England as nine out of the top 10 pairs are involved.

Last month’s Thailand Open I and II runners-up Aaron Chia-Soh Wooi Yik and Goh V Shem-Tan Wee Kiong are in for a tough time as they will have to deal with two formidable Japanese pairs – Keigo Sonoda-Takeshi Kamura and Yuta Watanabe-Hiroyuki Endo.

Malaysia will be represented by the same players bound for the Swiss Open.

Youngsters Chen Tang Jie-Peck Yen Wei and Yap Ling-Teoh Mei Xing also stand a good chance of sneaking in as they are placed first and second respectively in the reserve list of the mixed doubles and women’s doubles competitions. 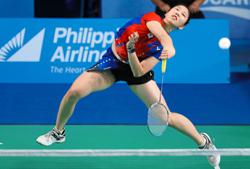