PETALING JAYA: The expectation was on the seniors but the juniors stole the show in the mixed doubles event at the back-to-back Thailand Open.

Pang Ron-Yee See had upstaged sixth seeds Hafiz Faisal-Gloria Emanuelle of Indonesia en route to reaching the semi-finals of the Toyota Thailand Open. It was their first win over a top 10 pair.

At last week’s Open, they gave eventual champions Dechapol Puavaranukroh-Sapsiree Taerattanachai of Thailand a good fight in the first round before losing 21-18,16-21,15-21.

“I’m not looking at the results but strengthening the processes. Pang Ron-Yee See played without any pressure as the underdogs. That was an advantage but they took their chances well, ” said Paulus.

“It’s good to have another pair moving up but there is still lots of work ahead of them.

“The seniors were not bad either but there are some areas that we need to work on.”

National No. 1 Soon Huat-Shevon still made it to the World Tour Finals next week as one of the eight qualifiers but Kian Meng-Pei Jing missed the cut after the first round defeats.

The Finals will be held at the same venue.

Besides Soon Huat-Shevon, Malaysia will also be represented by independent shuttlers Chan Peng Soon-Goh Liu Ying in the Finals. 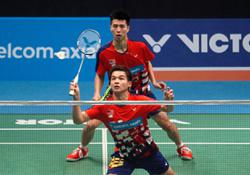