Not good enough: Goh V Shem (back) and Tan Wee Kiong lost to compatriots Aaron Chia-Soh Wooi Yik in the quarter-finals on Friday.

PETALING JAYA: The country’s top doubles pair Aaron Chia-Soh Wooi Yik have a chance to lift the gloom in the Malaysian badminton camp if they can stop Taiwan’s Lee Yang-Wang Chi-lin in the final of the Toyota Thailand Open today.

The duo marched into the title match after carving out an impressive 21-18,21-18 win over India’s Satwiksairaj Rankireddy-Chirag Shetty yesterday.

It will also be their first final appearance since finishing runners-up at the All-England in 2019.

Aaron-Wooi Yik will surely not be contented by just reaching the final as they will be going all out to deny the world No. 7 pair from securing their second straight title on Thai soil.

It will also be a great chance to avenge Goh V Shem-Tan Wee Kiong’s defeat to the Taiwanese at last week’s Yonex Thailand Open final.

But Aaron-Wooi Yik will have to bring out their best against the Taiwanese who knocked out second seeds Mohd Ahsan-Hendra Setiawan of Indonesia 14-21,22-20,21-12 in the other semi-final yesterday.

After putting behind the disappointment of crashing out in the first round last week, Aaron is hopeful they can carry their best form in the final to win their first major title.

“Our plan was clear today. We know what we had to do and we had an answer for everything our opponents threw at us.

“Both of us were calm under pressure. We have regained some confidence and are looking forward to the final tomorrow, ” said Aaron, who partnered Wooi Yik to beat compatriots V Shem-Wee Kiong 21-16,21-13 in the last eight on Friday.

Meanwhile, Chirag was happy to reach the semi-finals but disappointed with their performance.

“We didn’t play our best today. We couldn’t score points on our service but we were receiving well.

“I think if we’d been able to take a few points and converted the first game, the scenario would have been a lot different.”

Veteran Liew Daren’s fine run came to an end after he fell to Denmark’s world No. 4 Viktor Axelsen 16-21,15-21 in the last eight on Friday.

The independent shuttler was, however, not too disappointed.

“In the beginning of the match, I was not at my best. I was playing catch up and put myself under pressure. Viktor played very well.

“I have to say that I performed much better in this second tournament. Anyway, it feels great to compete again, ” added Daren. 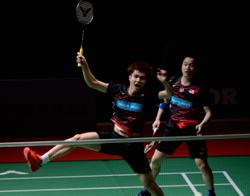