The world No. 15 squandered a few leads before going down 18-21,22-24 to India’s Satwiksairaj Rankireddy-Chirag Shetty in 37 minutes at the Impact Arena in Bangkok.

It was sweet revenge for the Indians after having lost to the Malaysians in the opening round of last year’s Malaysian Open.

Despite the defeat, Yew Sin-Ee Yi will still qualify for the World Tour Finals at the same venue from Jan 27-31.

They are currently ranked fourth, just three rungs ahead of national No. 1 Aaron Chia-Soh Wooi Yik in the Tour ranking. Only the top eight get to qualify for the Finals.

Satwiksairaj-Chirag will now take on the winner of the all-Malaysian quarter-final match between Aaron-Wooi Yik and Goh V Shem-Tan Wee Kiong.

In men’s singles, Anders Antonsen of Denmark put up a valiant fight to beat India’s Sameer Verma 21-13,19-21,22-20 in one hour and 21 minutes. He will take on the winner of the match between Viktor Axelsen and Liew Daren.

There were no major upsets in the women’s singles as top seed Tai Tzu-ying marched into the semi-finals with a 18-21,21-13,21-11 win over Michelle Li of Canada. She takes on fourth seed Thailand’s Ratchanok Intanon who beat India’s P.V. Sindhu of 21-13,21-9 in a lopsided match. The other semi-finals will be between Carolina Marin of Spain and South Korean An Se-young. 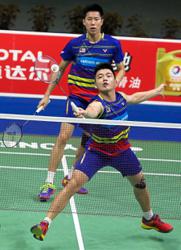