Dynamic duo: Thinaah and Pearly give the thumbs up after upstaging Kim Hye-rin-Chang Ye-na. — Badmintonphoto

The world No. 39 proved just why they are the stars in the making when they upstaged world No. 9 Kim Hye-rin-Chang Ye-na of South Korea for the biggest win of their career at the Toyota Thailand Open yesterday.

Pearly-Thinaah prevailed 16-21,21-15,27-25 over their illustrious rivals in the energy-sapping 87-minute contest, the longest match yet of the tournament, accomplishing what their seniors have failed previously.

World No. 14 Chow Mei Kuan-Lee Meng Yean had just gone down to Hye-rin-Ye-na in the last 16 of the first Open last week while world No. 25 Vivian Hoo-Yap Cheng Wen were defeated in the same stage of last year’s All-England.

Pearly-Thinaah have a great chance of reaching their second top-tier event quarter-finals in as many weeks as they face No. 60 Margot Lambert-Vimala Heriau of France today.

Last week, they were going great guns before having their run halted by eventual champions Apriyani Rahayu-Greysia Polii, the Indonesain world No. 8.

“Last week was our first Super 1000 (top-tier) event, so we learned our lessons, ” said Thinaah, whose fortunes changed after switching from singles just two years ago.

“We tried to do better and we were well prepared. Before the game we didn’t think too much... we weren’t expected to win, so we just wanted to play our game and that helped us put in our best performance.”

In the closing stages, Pearly-Thinaah came back from the brink to save two match points to force the match to go down the wire.

It took them until the fourth match point before they converted it into a famous victory.

“So nervous! I just kept telling myself to calm down. Talking to each other helped a lot, ” she said.

“Today what worked for us was that we believed in each other.”

Meanwhile, Liew Daren has vowed to keep the nation’s flag flying high in the singles challenge.

The 33-year-old progressed after being awarded a walkover by India’s B. Sai Praneeth who tested positive for Covid-19 in the latest screening on Monday.

Daren, however, has mixed feelings about having to play against an opponent from a “high risk” team.

“Obviously I’m concerned (to play with Prannoy). Praneeth tested positive after three weeks in the bubble... no one saw it coming, isn’t it?” said Daren.

“While we players won’t be in close contact, we’re still exposed to certain risks such as sweat that drops on the shuttle. The entire Indian team are training together. But the rules state the shuttlers from the affected team will be allowed to compete as long as they returned negative, so there’s nothing we can do about it.”

In the mixed doubles, Tan Kian Meng-Lai Pei Jing have suffered yet another early exit as they were sent packing by Marcus Ellis-Lauren Smith 21-14,15-21,19-21.

The defeat was a costly one as it virtually ended their hopes of qualifying for next week’s World Tour Finals.

“We’ve only got ourselves to blame. We just blew our best chance to make the Finals, ” said a dejected Kian Meng. 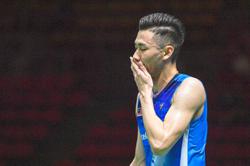