Pei Jing: ‘I really miss standing on the podium and putting up a worthy performance that will make Malaysians proud.’

PETALING JAYA: National shuttlers will have plenty to prove at the Toyota Thailand Open today.

Despite the absence of fierce rivals from Japan and China, as well as world No. 1 men’s doubles Kevin Sanjaya-Marcus Fernaldi of Indonesia in last week’s Open, none of the Badminton Association of Malaysia (BAM) players managed to progress beyond the quarter-finals at the Impact Arena in Bangkok.

More were expected of them as they were among the first batch of national athletes who were allowed to resume training despite the movement control order in mid-last year.

After going down tamely in the quarter-finals to second seed Chou Tien-chen of Taiwan, world No. 10 Zii Jia vowed to return with a much-improved performance.

“I hope I can put this behind me and come back stronger, ” said Zii Jia, who opens against India’s Sameer Verma today.

“I know we’ve been waiting for this tournament. I hope for a little more patience from the fans. I’ll surely give my best to fight back.”

Aaron-Wooi Yik, too, aim to get their act together.

“It’s going to be performance over result and one match at a time for us. Last week, we thought we could go far but ended up crumbling under pressure, ” said Aaron, lamenting on their uncharacteristic loss to Goh V Shem-Tan Wee Kiong in just 28 minutes.

“I think we only deserved 20% (out of 100%) for our performance, so we’ve got to buck up, ” he added ahead of a first round encounter against unheralded Thailand’s Weeraphat Phakrajung-Wongsathorn Thongkham.

Pei Jing admitted the second round defeat to Thom Gicquel-Delphine Delrue of France last week was a bitter pill to swallow and hoped for better showing with partner Kian Meng.

The world No. 11 have a tricky opener against England’s No. 9 Marcus Ellis-Lauren Smith tomorrow.

“We’re upset with our own performance against the French pair. It was hard to take and it took a few days for us to come to terms, ” said Pei Jing.

“We’ve a chance to redeem ourselves. Although, we got a challenging draw this week, we remain positive.

“We won the Thailand Open here five years ago when we played our best badminton, reached many finals and won titles between 2016 and 2017.

“I really miss standing on the podium and putting up a worthy performance that will make Malaysians proud.” 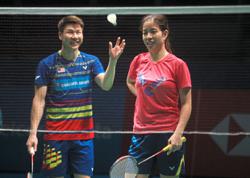