Resilience of a No. 1 – Momota’s back on court training again 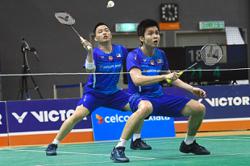 The 26-year-old is back on court again in the national training base in Tokyo, less than two weeks after he tested positive for Covid-19.

The world No. 1 men’s singles player was the highest profile badminton star to be infected with Covid-19 when he returned a positive test on Jan 3.

Momota and the entire Japanese team had to pull out from the season-opening Yonex Thailand Open as well as next week’s Toyota Thailand Open and the BWF World Tour Finals from Jan 27-31.

Momota, who survived and made a full recovery from a career-threatening car accident in Malaysia in January last year, posted a video on his Facebook page to announce his recovery status.

“Under the guidance of the public health centre, I have resumed practice today after a quarantine period.

“I would like to do my best so that I can show my healthy appearance on court and I like to thank everyone for the continued support.”

Momota’s quick return to training is a big boost for his Tokyo Olympics aspirations and also a welcome relief to the badminton fans who will be eager to watch the Japanese at his dominant best.

Momota should be making his return to competitive action when the BWF World Tour moves to Europe in March – the Swiss Open (March 2-7), German Open (March 9-14) and the All-England (March 17-21).