PETALING JAYA: Women's singles shuttler S. Kisona will have to play her first round match against India's Saina Nehwal at the Yonex Thailand Open after all.

In an unexpected turn of events, Saina has been cleared to compete after having previously tested positive for Covid-19 on Tuesday (Jan 12).

As such, the first round walkover awarded to Kisona has now been overturned and her match against the world No. 20 has been rescheduled on Wednesday (Jan 13), and the Badminton Association of Malaysia (BAM) is unhappy with the Badminton World Federation (BWF) decision.

"BAM wishes to put on record the association’s displeasure in the manner of how the BWF is handling certain matters in Bangkok, Thailand," said BAM in a statement.

It added that BAM notes the uncertainty of a retraction of a walkover decision compounded with the unfortunate timing of receiving such a decision will not augur well for the much-anticipated return of the sport of badminton.

"While we are pleased that some of these players have re-tested negative, it is however unjust to any player to be asked to participate in the first round again, especially after a decision to give a walkover was published in the official website."

BWF had on Tuesday said that players may continue to play in the tournament as long as they produce a negative test result.

Saina was one of the four players tested positive after a mandatory third screening on Monday.

The four players then underwent a second PCR test and an antibody blood test for further confirmation. Saina, Prannoy and Jansen have been declared negative and were cleared to play.

BWF explained that it received the results and reasoned decisions from the Diagnosis and Investigation Committee of the Thailand Ministry of Public Health – a working group of six doctors that has been formed just for this tournament.

"Nehwal, Prannoy and Jansen tested positive on the PCR test but their antibody IgG was positive.

A positive antibody test means a person has been infected with the Covid-19 virus at some point in the past, ” it said

"It does not mean they are currently infected. The trio all contracted Covid-19 in late 2020. The committee was satisfied that they are not infected and do not pose a danger to the tournament, ” added the BWF. 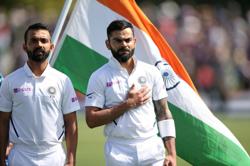