PETALING JAYA: Seasoned campaigner Chan Peng Soon is all smiles to have Chin Eei Hui back as his coach.

The 32-year-old sees the reunion with the latter as a massive boost to his preparation for the Tokyo Olympics. Peng Soon and his partner Goh Liu Ying, 31, have the best chance to qualify and do well in what could be their last Olympics.

Although Peng Soon did not openly declare it, it’s obvious that he and Liu Ying are hoping to accomplish an unfinished business with Eei Hui – winning an Olympics gold. Hard taskmaster: There’s no break for Chan Peng Soon even on New Year’s Day as he hits the gym under the close watch of coach Chin Eei Hui (left) yesterday.

Under Eei Hui, Peng Soon-Liu Ying came close before winning a historic silver at the Rio Olympics in 2016. They went down fighting to Indonesians Tontowi Ahmad-Lilyana Natsir in the final.

Peng Soon admitted that he did not see the reunion with Ee Hui ahead of Olympics coming.

“It was quite a surprise that we’re back as a team. I never thought this could happen, ” said Peng Soon.

“It’s an arrangement from our sponsors Li-Ning. We’re all excited with this timely partnership. Eei Hui is still very passionate and want to help us as much as we need her guidance.

“We have trained under her for many years when we were with the national team back then, so it shouldn’t be hard for us to adapt (to her training programme).”

Peng Soon-Liu Ying will first need to confirm their tickets for the Tokyo Olympics when the qualifiers resume in March.

They are currently ranked seventh in the Race to Tokyo standings and could still be displaced by compatriots – Goh Soon Huat-Shevon Lai Jemie (11th) and Tan Kian Meng-Lai Pei Jing (13th) – for the rights to represent the country unless two pairs from the same country are ranked in the top eight.

Peng Soon-Liu Ying will be aiming to get off to a good start in Bangkok when they return to compete for the first time in 10 months at the Thailand Open from Jan 12-17.

They will open their campaign against unheralded Indonesians Adnan Maulana-Mychelle Crhystine in the first round.

If they win, the fifth seeds will likely take on Japan’s Takuro Hoki-Wakana Nagahara in the second round. The real test will likely be in the quarter-finals against top seeds Dechapol Puavaranukroh-Sapsiree Taerattanachai of Thailand. 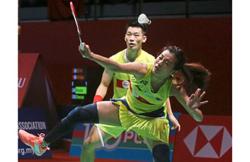