PETALING JAYA: It is rare for a woman to be an Olympian and then become a successful coach but badminton player Chin Eei Hui has proven to be a smashing hit in both.

The 38-year-old Eei Hui represented Malaysia in two Olympic Games with Wong Pei Tty in the doubles at the 2004 Athens and 2008 Beijing editions. On both occasions, they managed to reach the second round.

She then made her third Olympics appearance but as a mixed doubles coach at the 2016 Rio Games and led the national No. 1 Chan Peng Soon-Goh Liu Ying to a historic silver medal.

Peng Soon-Liu Ying could have won the country’s first gold but were edged by Tontowi Ahmad-Lilyana Natsir of Indonesia in a thrilling match.

For her efforts, Eei Hui was named Coach of the Year in 2016.

Eei Hui said her experience as a player has made her a better coach.

“Pei Tty and I were the first women doubles pair to qualify for the Olympics. I was only 22 when I arrived in Athens and were awed by everything. To be where the Olympics originated from 100 years ago was awesome, ” said Eei Hui, who trained under Cheah Soon Kit then.

“And I got to meet my tennis idol Roger Federer practically every day there as the Swiss contingents were our neighbours at the Games Village.

“I saw the commitment he showed even in training and it was inspiring. He was friendly too.

“In fact, most of the athletes were pumped up, no matter in what sport. Pei Tty and I enjoyed our debut, although we did not make any impact, we returned home enriched.”

Their luck changed when they won gold at the 2006 Commonwealth Games in Melbourne and then qualified for their second Olympics in Beijing.

“There were bigger expectations in Beijing but regretfully we didn’t clear the early round. Our standard of play with the world’s best was closer though and we knew, we gave a better fight, ” she said.

They were quite unstoppable after that as they went on to bag the 2008 and 2009 BWF World Super Series Finals titles and reigned as the world No. 1 in 2009.

Eei Hui also showed her prowess in mixed doubles when she bagged a gold with Koo Kien Keat at the 2010 New Delhi Commonwealth Games.

Eei Hui-Pei Tty came quite close to qualifying for the London Olympics in 2012 but missed out by a whisker when they ended up as the first reserves in the 16-women field.

She started as the women’s doubles coach in 2013 but by end of that year, she was promoted to head the mixed doubles department.

“My experiences at two Olympics and other tournaments prepared me well for the coaching job. As a player, I’ve learnt the highs and lows that an athlete goes through. I was able to guide, advise and listen to the players in a way that I think they will feel most comfortable with, ” she said.

“I’ve worked hard all my life and I’ve told my players that there are no short cuts, ” she said.

“The job is tricky, especially in doubles. Every player is unique and it’s important for a coach to understand them and vice versa. The toughest part is when players argue... that’s when I step in and try to find an amicable solution, ” she said.

“It’s a joy for a coach to see their players show progress and reap success. Witnessing Peng Soon-Liu Ying winning the Olympics medal will always be memorable to me.

“They achieved what I could not but it was satisfying to be part of their success.

“Kian Meng-Pei Jing and Soon Huat-Shevon have also won titles and that’s wonderful but I do get happy too whenever I see a player giving their heart and soul. They may not win but I know they had given their best, ” she added.

Two weeks ago, the Badminton Association of Malaysia (BAM) announced that they would not renew Eei Hui’s contract but she is not disappointed.

Eei Hui said she is in the midst of finalising her future plans but admitted there were challenges as a woman coach.

“There are not many women coaches out there and the pool of women shuttlers is also small, ” she said.

“The players have the potential but they need encouragement and support. I hope more parents will encourage their daughters to participate in sports.

“Most of the times too, men coaches are preferred but it should not dampen the spirits of women athletes who want to pursue coaching as a career whether in badminton or other sports.

“Gender should not be used as a yardstick, ” added Eei Hui. 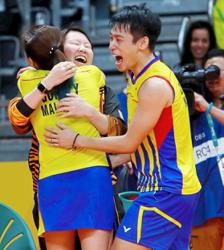