PETALING JAYA: Shuttlers Pearly Tan and Toh Ee Wei will reunite for the first time in two years to participate in the 100Plus National Junior Ranking Challenge final stage which gets under way at the Academy Badminton Malaysia (BAM) today.

The last time the pair fought side-by-side, they bagged the girls’ doubles silver at the 2018 World Junior Championships.

However, their partnership will only be for this week as Pearly is merely standing in for Ee Wei’s partner Anna Cheong, who pulled her arm muscle last week.

Despite their one-off appearance, Pearly and Ee Wei’s participation would add value to the mini tournament not only in terms of quality, but also be a source of inspiration for Cheng Su Yin-Goh Pei Kee and Low Yeen Yuan-Valeree Siow.

Both pairs earned their place in this week’s showdown against seniors after finishing as the top two pairs in the Ranking Challenge.

Making up the four-pair contest are Yap Ling-Teoh Mei Xing.

Pearly-Ee Wei had enjoyed an illustrious junior career where they were once ranked second in the junior ranking and were silver medallists at the Asian Junior Championships in 2018.

Ee Wei’s transition to the senior team hit a snag in 2018 when she was bugged by a chronic sinus problem. After a long layoff, she eventually rejoined BAM in July.

“It will be a reunion of sorts for Ee Wei and I’m replacing Anna who’s injured, ” said Pearly.

“We have not trained together for quite long, but then I think it shouldn’t be too much of a problem for us. Just a bit of discussion and strategising, I think we’re good to go.”

The return of Ee Wei has raised the possibility of Pearly and Ee Wei being made a permanent pairing once more.

However, Badminton Association of Malaysia (BAM) coaching director Wong Choong Hann confirmed that he and women’s doubles head coach Chan Chong Ming have no plans to change the existing combinations.

Pearly has been doing well with her singles-turned-doubles partner M. Thinaah. They are currently ranked 39th in the world. 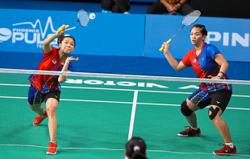 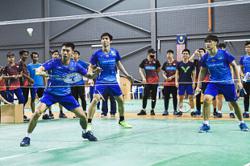