Marching on: Kenta Nishimoto will face Brice Leverdez for a place in the quarter-finals of the Denmark Open today.

PETALING JAYA: Japan’s Kenta Nishimoto is out to prove a point in the absence of top Asian shuttlers at the Denmark Open.

The 26-year-old flew to Odense this week chasing more than just glory as he intends to show his fellow shuttlers that life as a touring professional must go on amid the Covid-19 pandemic.

“There are many things I have been thinking about in light of the Asian leg being postponed to January and also the ranking points (for the World Tour Finals), but I was so keen to play at the Denmark Open,” said Nishimoto after beating Israel’s Misha Zilberman 21-9, 21-10 in his opening fixture on Tuesday.

“Of course there’s concern to come here but the best thing I could do is play and show it is possible to compete overseas and it was a big step to fly here.

“I feel very safe here, with all the measures.”

Nishimoto will be hoping to make the most after the withdrawals of several big guns including compatriots Kento Momota and Kanta Tsuneyama in the top half.

Nishimoto has never won on the World Tour, having came close on five occasions. He finished runner-up at the 2017 French Open, Malaysian Masters and Hong Kong Open in 2018, 2019 German Open and the Thailand Masters in January this year.

Nishimoto will take on France’s Brice Lever-dez for a place in the quarter-finals today.

Barring any upset, he is slated to face two Danes – Hans-Kristian Vittinghus and Rasmus Gemke in his road to the final.

Nishimoto is one of eight Japanese big names who have travelled to Denmark.

Okuhara, the 2017 world champion also got off to a flying start when she whipped Scotland’s Kirsty Gilmour of Scotland 21-7, 21-19. 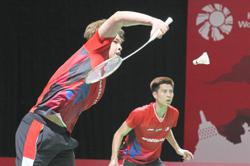