Still got the groove

The favourite: Carolina Marin is expected to cruise into the final in Denmark.

PETALING JAYA: It has been seven months since Carolina Marin last played competitively, but it was as if she had never been out of the game at all.

The reigning Olympic singles champion was back at her usual best as she whipped Russia’s Natalia Perminova 21-7,21-15 in just 28 minutes to book her place in the last 16 of the Denmark Open in Odense yesterday.

The Spaniard has not won the tournament before and her best result was reaching the semi-finals on three occasions including last year.

Marin will be pumped up to do well as she has yet to taste success this year after finishing runner-up twice at the Indonesian Masters and Spain Masters.

She was also a semi-finalist at the All-England before the Covid-19 pandemic brought the season to a halt.

“I feel happy to be back, finally, ” said Marin, who is also a three-time world champion.

“The most important thing for us is our health and we have to try to enjoy being back on court, getting the competition feeling because we miss it and to give our best in every game.”

With the withdrawal of top seed Akane Yamaguchi of Japan, Marin will have no problems making the final. Her only notable rival is American Zhang Beiwen whom she is expected to face in the last eight.

Second seed Nozomi Okuhara, the 2017 world champion, is in the other half alongside Michelle Li of Canada.

In the men’s singles, Japan’s Kenta Nishimoto and India’s Lakhsya Sen were among the familiar faces in a weakened field who advanced to the last 16.

Nishimoto, who now carries his nation’s challenge after world No. 1 Kento Momota and Kanta Tsuneyama pulled out of the tournament, beat Misha Zilberman of Israel 21-9,21-10.

Lakshya, 19, won bronze at the 2018 WJC in Canada while Popov clinched silver last year in Russia. 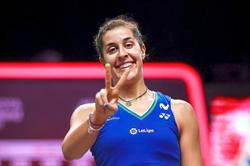 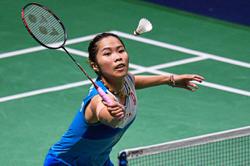