No Denmark Open means no World Tour Finals for Teo-Ong PETALING JAYA: Independent doubles shuttlers Teo Ee Yi-Ong Yew Sin are not making the trip to the Denmark Open after all.

After weighing their options, the world No. 14 Ee Yi-Yew Sin have finally withdrawn from the only European leg still left in the Badminton World Federation (BWF) calendar this year.

With that, there will not be any more Malaysians left in the tournament, scheduled in Odense, from Oct 13-18, as the Badminton Association of Malaysia (BAM) had decided earlier to withdraw their players.

Yew Sin said it was not worth the trip although it would mean that they would not be eligible for the World Tour Finals in December.

Only the top eight pairs can qualify for the Finals and the duo are currently ranked fourth.

“To go all the way to compete in only one tournament in Denmark finally did not appeal to us anymore. We are also worried about the Covid-19,” said Yew Sin.

Initially, Denmark was supposed to host the Thomas-Uber Cup Finals in Aarhus from Oct 3-11 and the Denmark Masters from 21-25 but it was eventually cancelled when several teams, including top seeded Indonesia decided to pull out from the Finals.

“Then, there is the 14-day quarantine when we return home. We would love to play but we are left with no choice now, we’ve withdrawn our names.

“We will miss the opportunity to play in the World Tour Finals because of our decision but it’s okay,” he said.

The world body had made it a ruling that only players who feature in the Denmark Open are eligible for the Tour Finals.

Yew Sin and Ee Yi, however, are hopeful for the BWF to give the greenlight for the two legs in Asia.

The world body have yet to name the venue but Thailand have indicated that they were keen to host it and have even come out with their own standard operating procedures to ensure the safety of players and officials.
Article type: metered
User Type: anonymous web
User Status:
Campaign ID: 18
Cxense type: free
User access status: 3 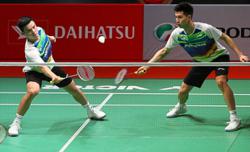