PETALING JAYA: S. Kisona will be out to keep her unbeaten record when she makes her second appearance in the Uber Cup Finals.

In her debut at the Finals in Bangkok, Thailand, two years ago, Kisona did well when she won her group matches against Indonesia and France as the third singles. She was not fielded against China.

World No. 92 Kisona, who is ranked second behind Soniia at 29, hopes to win all her matches as the second singles.

“I’ve won all my matches in my first Finals and hope to maintain it in my second outing,” said Kisona.

“I can’t predict how it will turn out to be but I can assure you that I’ll only give my best for the team and nation. I do not want to disappoint myself too.

“This Finals is my first tournament for this year and I’m so looking forward to it.”

The only surprise in the women’s team was the selection of Qi Xuan ahead of former World Junior Championships silver medal winner Lee Ying Ying.

Qi Xuan gave Soniia a good fight before losing in the internal tournament at the Academy Badminton Malaysia (ABM) last month and her gutsy spirit won the hearts of the selectors.

With Jin Wei’s condition being uncertain at the third singles as she has not competed in any major tournament since coming back from her stomach ailment, the 19-year-old Qi Xuan will be a reliable fourth singles player in the team. 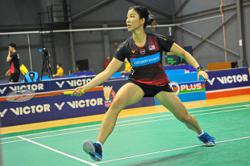