PETALING JAYA: Before the grand Finals in Aarhus, Denmark, get set for a dress rehearsal in Malaysia with our very own mini Thomas-Uber Cup Finals.

Badminton Association of Malaysia (BAM) coaching director Wong Choong Hann is in the midst of fine tuning the details of team competitions for the men and women at the Academy Badminton Malaysia (ABM) in mid-September as part of their preparation for the Finals in Denmark from Oct 3-11.

The competitions will take place after the players’ return from their four-day motivation camp in Tioman Island from Sept 3-6.

Choong Hann said they would decide the competition date as soon as he has assessed the condition of top singles players Lee Zii Jia and Leong Jun Hao.

Zii Jia and Jun Hao are recovering from lower back and hip injuries sustained during the national body’s internal tournament two weeks ago.

“We will assess the players’ conditions and then decide on the dates for the team competitions, ” said Choong Hann.

“It will be a one-day competition. We will divide the men and women players into two teams. I’m looking at a few things to make it interesting.

“This team competition will be a good warm-up ahead of the Finals in Denmark.”

Meanwhile, Choong Hann said the players would be briefed today on measures taken by Badminton World Federation (BWF) to ensure their safety during the Finals. BWF’s senior tournament series manager S. Selvam will address the players.

“Obviously, some players are concerned about their safety, so we have invited an official from BWF to speak and help allay their worries, ” said Choong Hann.

“We hope they will have a better understanding on the measures taken to keep them safe after the talk.”

All Thomas-Uber Cup teams have been permitted to enter Denmark and are exempted from the 14-day quarantine requirement but there are a few processes that the players have to go through upon arrival and during the tournament. 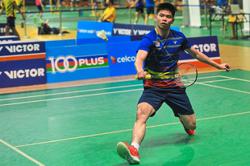