The shuttler was forced to retire midway through the opening match of the Badminton Association of Malaysia (BAM) Invitational Championships yesterday.

Soon Huat appeared to have hurt his right back while attempting a jumping smash while he and Shevon Lai Jemie were trailing Hoo Pang Ron-Cheah Yee See 4-5 in the second game. Soon Huat had showed no signs of of the problem when they outplayed their juniors 21-13 in the first game.

Shevon revealed later that Soon Huat had sustained the injury during their training session on Monday.

“Soon Huat is actually still recovering from the slight muscle pull on his right back on Monday. He was fine after being given treatment and rehab, ” said Shevon.

“But it looks like he aggravated the problem after pushing himself to the maximum. He showed his hunger right from the start, moving to every corner to retrieve the shuttle.

“If it had been just a normal training session, he would have slowed down.” 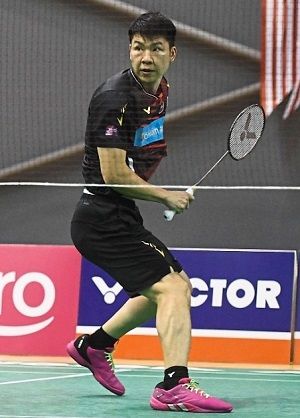 Hard luck: Goh Soon Huat in action just before a back injury forced him out of BAM’s Invitational Championships.

After conceding the match, Soon Huat had to be taken out in a wheelchair by medical personnel.

Although the extent of Soon Huat’s injury has yet to be confirmed, the pair’s campaign in the tournament seems to be as good as over.

Said Shevon: “It looks bad as he could hardly stand. But we will wait and see what the doctor says. If it’s serious, we will withdraw. Health comes first.

“It’s certainly disappointing because we have both prepared really well and are pumped up for the tournament.”

Fortunately for Soon Huat, he can afford to take some time off the court to recover as the season is suspended until the end of September.

Soon Huat and Shevon also won’t play any part in the Thomas and Uber Cup Finals in Aarhus, Denmark from Oct 3-11.

Barring any further delay, the World Tour is expected to resume with the Denmark Open from Oct 13-18, followed by the French Open from Oct 20-25.

The Olympics qualification will only resume from next January.

Still, the incident must come as a scare to Soon Huat, who has been plagued by injuries since he and Shevon made an impressive back-to-back semi-final appearances at the German Open and All-England in March last year.

They were forced to withdraw from the Asian Badminton Championships in April because of Soon Huat’s thigh injury and also pulled out from the Australian Open due to his hamstring injury. Low on a high
It’s priority and safety over prestige for Mei Kuan-Meng Yean
BAM discards Soon Huat-Shevon head to Europe with something to prove
One hectic job to fit in all four majors in one year
Zii Jia has nemesis Momota in his path at All-England
Dad’s not a problem
Fight like there’s no tomorrow, Flandi tells Sze Fei-Izzuddin
Taiwanese duo to skip All-England
Tan’s a smash hit on FB
New date but same status for Malaysian Open