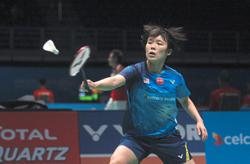 Vivian’s not done yet

PETALING JAYA: With the Thomas and Uber Cup Finals less than two months away, the Badminton Association of Malaysia (BAM) are sweating on the fitness of three key members of the women’s team.

The trio have been ruled out from the internal tournament as they are all deemed not match fit.

Two-time world junior champion Jin Wei is reportedly still not able to train at 100% although it has been 10 months since she had her stomach ailment fixed with a colectomy last October.

Both Kisona and Vivian have played down the seriousness of their conditions, saying their Uber Cup preparations remain on track.

“I’m still training as usual, it’s just that I have slowed down a little bit because of the tight quads,’ said the 21-year-old Kisona.

“It’s unfortunate that this has to happen now as I was training well recently.

“I was really looking forward to this internal tournament, but as much as I want to play, it’s better not to take any chances.

“The recovery has been slower than usual. But it did not come a surprise because I’m still trying to adapt to the training regime under new coach Indra (Wijaya). Also, we stopped training for such a long period due to MCO, so it’s understandable.

“Everything is fine. It’s not affecting my preparations for the Uber Cup.”

Vivian, who partners Yap Cheng Wen, said she’s been out for three weeks to let her knee heal and is only expected to resume training next week.

“It’s nothing serious. I decided to undergo this treatment to fix my knee joint a few weeks back. Previously, we were quite busy with tournaments,” explained the 31-year-old, a two-time Commonwealth Games gold medallist.

“It’s a nagging problem, so I have to be extra cautious. It’s like an old engine that needs servicing.

“I was advised by the doctor to not go all out yet. So, I have to sit out of this week’s tournament and get ready to train as usual beginning next week.

“I definitely hope there will be another internal tournament held as my partner and I need some competitive action to regain our match sharpness.”

In the absence of Jin Wei and Kisona, the women’s singles competition is down to being a four-player contest featuring Soniia Cheah, Lee Ying Ying, Eoon Qi Xuan and K. Letshanaa. 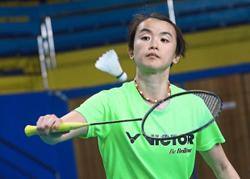 Vivian’s not done yet