PETALING JAYA: The remainder of the Badminton World Federation (BWF) World Tour season is in jeopardy with at least three notable legs set to be called off even before the September restart.

This comes following the Chinese government’s announcement that it is cancelling all international sporting events for the rest of the year, with special dispensation given only to the 2020 Beijing Winter Olympics trials.If this happens, it is going to affect three World Tour tournaments in the country – the China Open in Changzhou from Sept 15-20, Fuzhou China Open (Nov 3-8) and the World Tour Finals in Guangzhou (Dec 16-20).

The absence of these tournaments is set to hit the world body hard as they make up a major part of the schedule and boasts lucrative prize monies of between US$750,000 (RM3.2mil) and US$1.5mil (RM6.4mil).

The BWF, however, are not about to take these three events off the calendar yet.

“The BWF are aware of the directive announced by the General Administration of Sport of China regarding the restriction of international sports for the rest of 2020,” said BWF in a brief statement yesterday.

“BWF are in close contact with our relevant partners including the Chinese Badminton Association (CBA) to get more clarity on the situation and how this will affect the BWF tournament calendar 2020.

“There will be no further comment at this point in time.”

He said the world body should at least make an immediate stand on the staging of the World Tour Finals, which is a major tournament.

“Quite a funny press release. Not much information one can gain from it,” he added.

“The (bigger) question is whether the Tour Finals is on or off? It’s a Level 1 event, on par with the World Championships and Thomas-Uber Cup Finals.”

Since the revamped calendar was unveiled on May 22, the schedule has been hit by a series of cancellation which included the lower-tiered Hyderabad Open and Lingshui China Masters both scheduled in August.

These tournaments were supposed to kickstart the season which was suspended after the All-England on March 15 due to the Covid-19 pandemic.

And there are more impending bad news for the BWF.

The BAM have hinted they could call off the Malaysian Open, scheduled for Nov 24-29, as it is not “financially viable” to hold it.

Another tournament, the Indonesian Open (Nov 17-22), will depend largely on how the situation is in the country with the coronavirus.

Three weeks ago, the All-Indonesia Badminton Association (PBSI) have been told by their government that the event will only be allowed to proceed if Jakarta is declared a “green zone”. 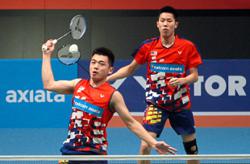