Anthony back on the rise after All-England flop

Skilful: Anthony Ginting is the only player to have beaten Japan’s Kento Momota in the last 11 months.

PETALING JAYA: Anthony Ginting showed that he is still the man to beat when he won the All-Indonesia Badminton Association (PBSI) Home Tournament.

The 24-year-old underlined his status as the country’s No. 1 singles shuttler by defeating third-ranked Shesar Hiren Rhustavito 21-19, 21-15 in the final on Friday.

Second-ranked and Asian Games gold medallist Jonatan Christie had to concede a walkover to Shesar before the semi-finals due to cramps.

Anthony’s achievement was the perfect response to his meltdown at the All-England in March.

Anthony went to the tournament with a lot of promise as he had retained his Indonesian Masters crown and led Indonesia to the Asia Team Championships title in Manila but lost to Denmark’s Rasmus Gemke in the first round.

Now that he had regained his form, Anthony will be hoping to carry the momentum into the World Tour when the season resumes in September.

The Asian Games bronze medallist is being touted as one of the major contenders at next year’s Tokyo Olympics as he has consistently given world No. 1 Kento Momota a run for his money.

In fact, Anthony is the only player to have beaten the all-conquering Japanese in the last 11 months. He prevailed over Momota at the quarter-finals of the French Open in October last year.

He also finished runner-up to Momota on three occasions last year – Singapore Open, China Open and World Tour Finals – leading to their fierce battle being compared to the rivalry between Lin Dan and Lee Chong Wei.

The Indonesian media even coined their rivalry as ‘MomoGi’, a popular corn-based snack in Indonesia.

Although Anthony only managed four wins in their 15 encounters since 2015, it is worth noting that eight of his defeats ended in rubber games. 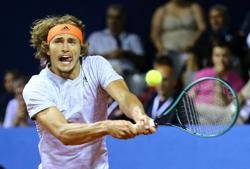 German Zverev yet to decide on playing U.S. Open