PETALING JAYA: A simple dental appointment turned out to be a numbing nightmare for former doubles shuttler Tan Boon Heong (pic) when he found he could not lift his hand. The former All-England champion Boon Heong feared that he would never be able to lift a racquet anymore.

Fearing that his badminton playing days were over, Boon Heong resorted to massages, acupuncture and traditional medicine. Luckily for him, the feeling in his hand came back after about four days. And he is well on the road to full recovery.

It all started with a molar extraction last week, said Boon Heong.

“I have to admit that I did not take good dental care during my playing days, ” said Boon Heong, who formed a fearsome doubles pair with partner Koo Kien Keat between 2006 and 2010.

“The dentist had to remove my molar. I had to keep my mouth open for two and half hours during the procedure.

“The following day, I could not lift my left hand and my neck was stiff. I could not even eat. It was terrifying.

“I feared I would not be able to play badminton anymore. I even suspected someone ‘did something’ to me and was tempted to resort to a bomoh (traditional healer).”

“Dazhi runs his own traditional treatment centre and eased my pain. He has been quite helpful to all the independent players. I went to a hospital later and took some medication. I’m much better now, ” he said.

Boon Heong’s fear of not being able to use his hand is understandable as badminton is his rice bowl.

“I run several academies and sometimes, I coach players from overseas. I need to be in good shape, ” said Boon Heong, who held the fastest smash in 2009 after hitting the shuttle at the speed of 421kph during an experiment.

And in 2013, Boon Heong improved the fastest smash record to 493kph in another event.

The 32-year-old Boon Heong runs his TBH Academy at six centres for children aged between seven and 15. The academies are in Kepong, Puchong, Kota Damansara, Subang, Petaling Jaya and Sungai Buloh. 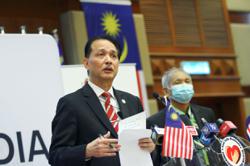