Para shuttler Didin not on the edge despite advancing age

PETALING JAYA: Former world para badminton champion Didin Taresoh insists age is just a number as he set sights on a podium finish in what could be his first and final Paralympic Games next year.

Didin, who competes in the SS6 (short stature) category, will be 46 when the postponed Games take place from Aug 24-Sept 5, but has no qualms about his ability to upstage younger rivals who are at least 10 years his junior.

Didin is certainly not short on credentials having captured the world title in Stoke Mandeville, England, in 2015 before adding a bronze in Ulsan, South Korea, two years later.

He is also the 2017 Kuala Lumpur Asean Para Games gold medallist and runner-up at the 2018 Indonesian Asian Para Games.

However, Didin could not replicate the same kind of performance since last year after injuring his right hip.

Despite that, he did well in the Race to Tokyo qualifiers which began in May last year to be placed fifth in the standings.

As it stands, Didin is almost certain to make the top-six cut as there is still another qualifier – the Spanish Para-Badminton International – before qualification ends on March 29 next year.

“I’m not too concerned about my age. As long as I can maintain my fitness, I stand a chance against anyone, ” said Didin, who is a school teacher.

“Last year was not a good year as I had to compete with a hip injury which affected my knee. So I wasn’t able to play at my best.

“I had to plod on because I needed the ranking points. Fortunately, despite the pain, I’m still able to put myself on the right track for the Tokyo Games.

“This is the first time badminton is contested at the Paralympics and I don’t want to miss it.

“It’s also my best chance to probably end my career as a Paralympics medallist.

World No. 7 Didin will have to overcome his arch-rivals such as Nagar Krishna of India, Jack Shepard of England and Chu Man Kai of Hong Kong, the three highest-ranked players in the SS6 category, if he is to achieve his target.

“They are all younger than me by at least 10 years. Shepard, the reigning world champ, is just 22, ” he said.

“When I played against him in the quarter-finals in Basel (World Championships) last year, I took him to a rubber game. Apart from Shepard, I have won against the others.

“The Tokyo Games will feature only six players, but this is the cream of the crop. My target is to enter the semis first. If I can do that, then the sky is the limit.” 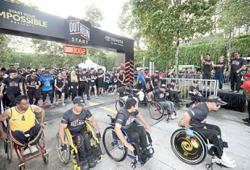